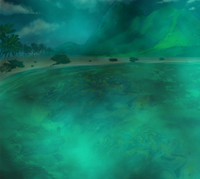 Tragedy Reef is the first of two Islands in the Roperian Garbage Patch region and was first released on Dec 3, 2018.

Description: Tragedy Reef was once a lovely tropical reef ideal for surfing and sunbathing, but it's been completely trashed by careless and greedy people ... it's by far the most tragic situation in Roperia!

Progress through The Story of Roperian Garbage Patch Adventure which requires either catching a Double Reignbow Fish (requires level 750 Cold Fusion and Holy Hybrid poles) or paying 250 RLC to bypass that. You'll then need to buy a bunch of equipment at Glacier Shack's pole shack.

A rogues gallery of each Lover's Lake fish can be found in The Fish of Tragedy Reef.

Equipment for The Story of Roperian Garbage Patch Adventure is bought at Glacier Shack.

The Deputy or Remediator can be found at the Glacier Shack pole shack. They cost 1,500 silver each (more if you purchased them when they first came out). The Trash Trimmer and Bounty Hunter Licenses can be found after the bottom of any of the purchasing poles/add-ons/chum lists. They cost 99,999 and 49,999 silver respectively.

Using the Trash Trimmer, you must "Trim" the trash, which will clear out the area for 60 minutes, during which you can fish as normal. When used, it gives you a chance at finding a piece of the Trimmed Tragedy Collectables set. If you have handed in this set, then the Trim will clear out the area for much longer, and you will no longer be required to Trim before fishing, but you can Trim anyways to try to get more Collectables.[1] Trimming will also reset the timer for the Garbage Sweeper in Plastic Island and vice versa.

You also need to have a Bounty Hunter License which has to be renewed every 30 days. If this is not renewed, you risk the chance of being caught by the Roperian Coast Guard, which will result in being deported to Glacier Shack and a fine of 20,000 silver. You can get a license from handing in a set of the relevant Collectables, or you might luck out and occasionally find one when skimming trash with the Trash Trimmer. If you have licenses from handing in Collectables, be sure to Activate that one instead of selecting Renew, otherwise you'll be paying the 49,999 silver to buy a license.

Retrieved from "https://fishwrangler.fandom.com/wiki/Tragedy_Reef?oldid=40334"
Community content is available under CC-BY-SA unless otherwise noted.