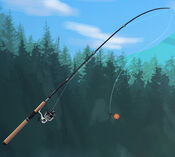 Below is a list of the quests available for the Reelistic.

NOTE: All quests have a final quest fish that is +5 levels higher then that quests pole level requirement. So a player might want to hold off starting that quest for a couple of levels until able to catch that higher level quest fish.

(Difficulty: 2/10)
Catch a mess of bluegills, sunfish and black crappie for this dinner!
Pole Req: Level 6+ Reelistic Quest specific tips: The White Bass is a level 11 pole fish. You could use a specific Chum to double your chances of catching a specific fish, but all of the quest fish are rated Fairly Prolific in Lover's Lake, except for White Bass which is rated Numerous and requires a level 11 (or level 9+RLC) Reelistic pole. You can also drop off the fish directly at Lover's Lake's The Chataeu D'Amour.
Catch Req's: 35 Bluegill Fish, 27 Sunfish Fish, 21 Black Crappie Fish, 14 White Bass Fish ×1.5 when done with friend

(Difficulty: 4/10)
Chef Wolfie needs a whole lot of splake for the next wedding!
Pole Req: Level 28+ Reelistic Quest specific tips: The White Catfish requires a level 33 Reelistic. Again all fish are found in Lover's Lake and should come fairly easy with the first Black Crappie habitat of Fairly Prolific while the other 3 are Numerous habitat. Each fish also has a chum preference which can be used to double your chances if catching any one is too slow.
Catch Req's: 40 Black Crappie Fish, 17 White Bass Fish, 12 Splake Fish, 10 White Catfish Fish ×1.5 when done with friend

(Difficulty: 5/10)
You overheard Chef Wolfie say that this is his other signature dish.
Pole Req: Level 44+ Reelistic Quest specific tips: The Smelt requires a level 49 Reelistic. All of the fish are found in Lover's Lake again. The first two are Numerous habitat and should come fairly easy. The bottle neck fish will likely be either the Yellow Perch or the Smelt, which are Very Rare and Threatened respectively. One can also catch the Smelt at Heartbreak Falls if have unlocked that island, but there is no benefit in going there as it is the same Threatened habitat at both locations.
Catch Req's: 32 Splake Fish, 16 White Catfish Fish, 15 Yellow Perch Fish, 9 Smelt Fish ×1.5 when done with friend

The Channel Catfish with a Almost Extinct habitat will likely be your bottle neck fish regardless which island route one takes and will likely take a decent amount of time catching 13 of them unless choosing to use some boosts like Love Chum and/or even Liquid Gold.
Catch Req's: 28 Yellow Perch Fish, 17 Smelt Fish, 15 White Perch Fish, 13 Channel Catfish Fish ×1.5 when done with friend

(Difficulty: 7/10)
Mm, mm! This is nearly as good as buttered lobster!
Pole Req: Level 69+ Reelistic Quest specific tips: The Burbot requires a level 74 Reelistic. All of the fish can be found at Heartbreak Falls. Start off with the Allure Chum to catch the Smelt. With some luck, most of the Smallmouth Bass and Burbot will be caught while eliminating the Smelt, as they have Fairly Prolific and Numerous habitats respectively. If not might want to switch to the Stinky Chum which will attract the last two Brown Bullhead and the Burbot. The Smelt or the Brown Bullhead both with a Threatened habitat will likely be your bottle neck fish. Even though the Smelt starts off with a quest boost, as there are 34 of them it still might be your last fish needed to finish. This quest will likely go quicker then the prior one though.
Catch Req's: 34 Smelt Fish, 22 Smallmouth Bass Fish, 10 Brown Bullhead Fish, 20 Burbot Fish ×1.5 when done with friend

(Difficulty: 7.5/10)
You need to catch a surprising number of fish for this dish!
Pole Req: Level 94+ Reelistic Quest specific tips: The Walleye requires a level 99 Reelistic. All of the fish are in Heartbreak Falls. Both the first White Perch and last Walleye are Endangered and as such might be your bottle neck fish. So start off with Frisky Chum to attract and knock out the larger amount of 35 White Perch. After the White Perch are eliminated switching to Allure Chum which will attract any of the remaining three that still needs to be caught. It is likely will already have eliminated all the Atlantic Salmon and Coho Salmon at Numerous and Average habitats respectively by the time have finished the White Perch though.

Side note: during doing this quest, or shortly after completed, will need to catch your 100 lbs of Steelhead Trout Fish in order to advance the The Story of Big Love Island Adventure Ch #7 - Part #2 storyline in order to unlock Rakkaus Tarn.
Catch Req's: 35 White Perch Fish, 21 Atlantic Salmon Fish, 19 Coho Salmon Fish, 10 Walleye Fish ×1.5 when done with friend

(Difficulty: 9/10)
Many folks think that catfish is best when it's lightly battered and fried and served with hush puppies!
Pole Req: Level 123+ Reelistic Quest specific tips: The Flathead Catfish requires a level 128 Reelistic. Please take note that player will not be able to catch the Flathead Catfish until it is unlocked by following in fish description, Hunting for sparkles than go noodling for him. Needs Info.
Catch Req's: 41 Steelhead Trout Fish, 32 Bull Trout Fish, 29 Blue Catfish Fish, 10 Flathead Catfish Fish ×1.5 when done with friend

(Difficulty: 20/10)
The Super Bonus Quest of Red Love Bay, Lover's Lake, Heartbreak Falls, Rakkaus Tarn (Big Love) requires Farovian Wranglers to catch an unholy number of the rarest fish in town! Not for beginners.
Pole Req: Level 180 Reelistic
Rewards: 110 Free Love Chum, 55 Red Sharks, and 5 Liquid Gold Quest specific tips: In order to start this quest, you must have completed the quest sets for the Reelistic Poles. This quest is very, VERY hard, and not recommended for the faint of heart. Needs INFO.

Retrieved from "https://fishwrangler.fandom.com/wiki/Reelistic_Quests?oldid=38626"
Community content is available under CC-BY-SA unless otherwise noted.