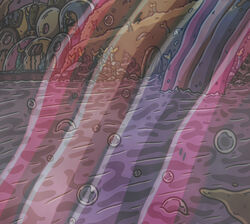 Rainbow Rising is the first of three island locations in the area of Mermaid Cove of Roperia region. It was first released Dec 11, 2019 and is the 65th island in FW (25th in Roperia).

The ideas for the entire Mermaid Cove area came from one of the wranglers Shay Upham found in the forum thread here and all the artwork was done by Diego.

Description: Rainbow Rising's location isn't exactly known, all we know is those who need to be here will find their way here. Nothing seems normal since the Darkness emerged. The fish here are a smorgasbord and spattering of many types, all who came in hopes of riding the rainbow with Sirene.

Getting to Rainbow Rising Edit

The first time, while in Roperia, you will get the following message:

Rainbow Rescue: One day whilst travelling through the Roperian islands I heard a sweet melodic voice bouncing through the winds, I talked to many other fisherman throughout Roperia to be told about the legend of Mermaid Cove. It is said that the voice of Sirene, the ancient mermaid can often be heard amongst the Roperian winds on dark gloomy days.

Success 5 mins 37 secs left in my search for Sirene... One day whilst travelling through the Roperian islands I heard a sweet melodic voice bouncing through the winds, I talked to many other fisherman throughout Roperia to be told about the legend of Mermaid Cove. It is said that the voice of Sirene, the ancient mermaid can often be heard amongst the Roperian winds on dark gloomy days.

After waiting about 5-6 minutes

Unlocked Rainbow Rising! Voyage to Rainbow Rising? On my travels I heard this most angelic voice again, and decided to follow it through the gloomy weather. After what seemed like hours of tracking down the location of this voice, I emerged from a thick cloud of darkness to the site of the most interesting beach I had ever laid eyes on, Rainbow Rising!

Set sail for Rainbow Rising? You will get the following message as you travel there:

Rainbow Rescue: “Hey Wrangler! I can set you up with a new pole specially designed to catch the wild creatures that lurk here, and I also have a huge supply of UV cream to keep you fishing through those hot days! Don't forget to keep topped up, if you let it dry out you'll burn and need to seek some specially crafted aftersun to patch you up, however making this cream is hard and does not come cheap, so make sure to look after yourself!” cries Sandy. Purchase a new pole at Sandy's Shack?

What to catch Edit

How to Play Edit

You will need to use one of the two featured poles as well as "Living Chum". You also need to apply "UV SunsCream", which acts kind of like the Oxygen Tank, in that it has a certain percentage that decreases and can be refilled at the shop.

Completing quests in all of the Mermaid Cove rainbow island locations with the Extendarod / Handline poles requires the new mechanic of requiring 'x' amount of weight, instead of 'x' number of fish. While this is not a new concept (ie: unlocking story requirements in the past has used this), the Extendarod / Handline quests of all of the Rainbow Islands are the first to use this new mechanic.

For example the first Handline quest Eeliscious requires catching a total of 205.63 lb's or 93.3 kg's of the Octomaid Fish to complete the first fish of that quest.

The Rainbow Rescue is a collectable set for all of the Rainbow Islands. Can start this by collecting the first Collectable #1 of 5 piece of Waterpoof Plaster. The rest of the 4 pieces are found in the next rainbow islands. Turning in this set rewards the valuable (100) UV SunsCream as well as (5) Deckhand Voucher & (1) Large Ice Cube.

What to buy Edit

You can also buy UV SunsCream that refills up to 100%

You can only fish with Sardine Chum, Mullet Chum, or Squidy Chum which are considered Living Chum. You can also fish with RLC/FLC.

To unlock the next area Rainbow Rubble, you will need to have finished one of the Extendarod Quests or Handline Quests:

Example with A bit of everything Quest:

After Accept Crate of UV Sunscream, you will get a message such as:

You can then travel to Rainbow Rubble

Retrieved from "https://fishwrangler.fandom.com/wiki/Rainbow_Rising?oldid=40840"
Community content is available under CC-BY-SA unless otherwise noted.