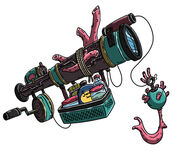 Below is a list of the quests available for the Extendarod. The quest objectives are mainly in aggregate fish weights instead of by quantity.

(Difficulty: 4/10)
To gain the best taste of Melody Beach, we've put together a dish packed full of flavour, made with the tastiest fish in the area!
Pole Req: Level 20+ Extendarod
Rewards: Unlocks Storyline Quest specific tips: The maximum number of fish required IF only catching all minimum weight fish is; 47 Octomaids, 31 Fanged Camo, 22 Roller Rays, and 6 Siren's. But should be less as will likely catch fish above the min weight. All of these fish are only found in Rainbow Rising. Note that the Siren Crab Fish requires a level 29 pole, so unless you don't mind a long delay before finishing, you will want to get your pole close to that level first. Use Mullet Chum as preferred chum for the Critically Endangered Siren Crab Fish and the Extremely Rare Roller Ray. The first two prefer Sardine Chum
Catch Req's: 205.63 lb's / 93.3 kg's Octomaid Fish, 248 lb's / 112.5 kg's Fanged Camo Flattie Fish, 396 lb's / 179.6 kg's Roller Ray Fish, 4.5 lb's / 2.0 kg's Siren Crab Fish ×1.5 when done with friend

(Difficulty: 5/10)
The silky skin of the grass eels allow you to slurp these puppies down whole, topped with flower hat jellies oozing with the best natural vitamins you can get, this is one soup you wouldn't want to miss out on!
Pole Req: Level 42+ Extendarod
Rewards: Unlocks Storyline Quest specific tips: This can be started in Rainbow Rising or Rainbow Rubble by catching the first Cow Ray's as it is in both locations. But will need to move on to Rainbow Rubble in order to catch the remaining fish. The maximum number of fish required IF only catching all minimum weight fish is; 30.4 Cow Rays, 20 Flower Hats, 6,336 27 Grass Eels, 20 Rainbow Gliders, and 33 Spotted Goby's. But should be less as will likely catch fish above the min weight. Spotted Goby Fish requires pole level 47. Outside of the Cow Ray Fish, the others prefer Squidy Chum so best to focus on those. Since Cow Ray Fish weigh more, this will skew your percentage completion so that even if you are 90% done, you might really be about 50% done.
Catch Req's: 266.25 lb's / 120.8 kg's Cow Ray Fish, 10 lb's / 4.5 kg's Flower Hat Jelly Fish, 396 1.69 lb's / 765 g's Grass Eel Fish, 20 lb's / 9.1 kg's Rainbow Glider Fish, 4.13 lb's / 1.9 kg's Spotted Goby Fish ×1.5 when done with friend

Retrieved from "https://fishwrangler.fandom.com/wiki/Extendarod_Quests?oldid=40867"
Community content is available under CC-BY-SA unless otherwise noted.