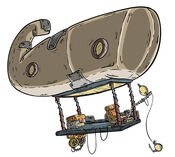 Below is a list of the quests available for the Dirigible.

(Difficulty: 1/10)
For your first flight test, you’ll need to catch some fairly fragrant flyers!
Pole Req: Level 16+ Dirigible
Rewards: Unlocks Storyline Quest specific tips: All of these fish should come fairly easily, however with 181 fish in total it will take a little bit of time. The first three are all Fairly Prolific habitat. Even the last Puff Gassy is Numerous and so easily catchable. The first time doing this quest IF you start at pole level 16, the Puff Gassy will likely be your bottle neck fish due to its slightly less habitat and especially due to Puff Gassy is level 18 fish, so the first three will have head start catching them.

Could use Pretzel Chum to attract the Bajan if needed but with its population this likely will not be necessary.
Catch Req's: 60 Bajan Fish, 48 Flying Hippie Fish, 38 Boomer Manta Fish, 35 Puff Gassy Fish ×1.5 when done with friend

(Difficulty: 3/10)
These small, speedy fish will be a bigger challenge!
Pole Req: Level 29+ Dirigible
Rewards: Unlocks Storyline Quest specific tips: Again the last Frantic requires +2 pole levels higher then the starting quest requirement. The first Red Shark with a Threatened habitat is the most difficult to catch in this quest, so recommended to use Pretzel Chum for the Red Shark preference to attract. However, as it is the first will receive quest boost, plus if using Pretzel for even more boost, they should not be too hard to catch. The Dashi with Numerous habitat will be the easiest to knock out. This will likely leave the Frantic with Average habitat (plus +2 pole levels higher if starting quest as soon as pole level requirement is met) as being your last bottle neck fish. A fairly easy bottle neck fish.
Catch Req's: 20 Red Shark Fish, 35 Dashi Fish, 30 Frantic Fish ×1.5 when done with friend

(Difficulty: 5/10)
These fish love flying through life in the fast lane!
Pole Req: Level 38+ Dirigible
Rewards: Unlocks Storyline Quest specific tips: The last Flapper requires +2 pole levels higher then Pole Req of 38+ to start this quest. None of these fish has a chum preference, so can use any of the flying chum and/or LC. The first Frantic and the last Flapper has quite easy habitat populations of Average and Numerous respectively. The Skydiving Miny with a Extremely Rare habitat is the hardest to catch but with half the required amount needed should not prove too difficult. This quest will still likely take a couple of days with a minimum of 87 casts needed if every cast is a quest fish. Depending upon luck, it should be around 200 - 300 casts to complete.
Catch Req's: 35 Frantic Fish, 16 Skydiving Miny Fish, 36 Flapper Fish ×1.5 when done with friend

(Difficulty: 8/10)
These fish rock hard and are even harder to catch!
Pole Req: Level 58+ Dirigible
Rewards: Unlocks Storyline Quest specific tips: The last Space Coddity is level 61 so is +3 levels higher then Pole Req 58+ to start this quest. It is recommended to use Pretzel Chum to attract the last Space Coddity as soon as your pole is level 61, even though it has an easy habitat population of Numerous, due to the sheer greater number of 43 needed (and especially if starting this quest before capable of catching any). The Flapper at Numerous should come fairly easy but will take some time and casts as needing so many. The Jefferson Airfish is a tougher Almost Extinct habitat but with only needing one should be able to eliminate by the time have caught all the required Flapper, unless extremely unlucky. The next Cod Zeppelin is Threatened, however should have caught most of these (if not all of them) by the time you have eliminated the prior two fish. This will leave the last two of Rocket Clam and Space Coddity both with Numerous populations as likely your last bottle neck fish, simply due to larger numbers required. Once you are done with Space Coddity, switch to a different chum such as Ambrosia Chum (or Cosmo Cream Chum if your pole level is 80+), so that the chum is not attracting the special non-quest fish.

None of these fish should prove to difficult to catch but with a total of 130 required will take some time and likely over 300 - 400 casts in total depending upon luck.
Catch Req's: 38 Flapper Fish, 1 Jefferson Airfish Fish, 12 Cod Zeppelin Fish, 36 Rocket Clam Fish, 43 Space Coddity Fish ×1.5 when done with friend

(Difficulty: 7/10)
For this quest, you’ll need to land some truly epic flying fish.
Pole Req: Level 82+ Dirigible
Rewards: Unlocks Storyline Quest specific tips: The last Sylph is Level 84 which is +2 pole levels higher then this Quest Pole Req. It is recommended to use Ambrosia Chum to attract the Griffly. Starting off, both the Djinn and the Erna at Fairly Prolific and Numerous respectively should come easy. Just will take couple hundred casts to catch them all. The next Griffly at Threatened habitat is the most difficult to catch, but with only 13 required and using Ambrosia chum should be mostly already caught by time eliminating the first two. The last Sylph is Fairly Prolific so will depend on what your pole level was when starting this quest to how many are remaining and/or if already eliminated by time you get to this point. This quest will be more about knocking out the larger numbers of 169 total fish and with so many Fairly Prolific and Numerous habitat fish found here so will take lot more casts and time then one would think. As such this quest can easily take several days up to a week to complete.
Catch Req's: 56 Djinn Fish, 49 Erna Fish, 13 Griffly Fish, 51 Sylph Fish ×1.5 when done with friend

(Difficulty: 10/10)
Land even more mythical flyers in this quest!
Pole Req: Level 86+ Dirigible
Rewards: Unlocks Storyline + 2 Liquid Gold (1 Liquid Gold on subsequent quest) Quest specific tips: Roc Fish is at level 95 and Sphinx Fish is at level 100 so if you are within 2 levels below, especially for Roc Fish, you may get misses. The Griffly Fish and Roc Fish prefer Ambrosia Chum. The Sphinx Fish are Near Extinction but you might be able to catch them before the rest since there are a lot of fish to catch. Expect about a thousand casts and over a week, although with RLC/FLC and favorable quest boosts it could go faster with most placements in the top 100 fastest being around 4-6 days.
Catch Req's: 60 Djinn Fish, 50 Erna Fish, 14 Griffly Fish, 55 Sylph Fish, 39 Wyvern Fish, 47 Roc Fish, 3 Sphinx Fish ×1.5 when done with friend

Retrieved from "https://fishwrangler.fandom.com/wiki/Dirigible_Quests?oldid=40022"
Community content is available under CC-BY-SA unless otherwise noted.